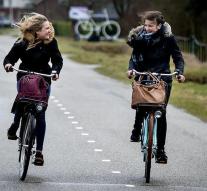 the hague - The Netherlands is getting on Wednesday morning with the first autumn storm of this year. The ranks for cyclists: hands on the steering wheel.

The KNMI and Rijkswaterstaat warn of very heavy winds and a lot of rainfall from the end of the night until noon.

For Wednesday, code is issued orange for the provinces of South Holland, North Holland, Friesland, Groningen and the Wadden and IJsselmeer region. There are winds of over 100 km per hour through the west storm from 6 o'clock in the afternoon until late afternoon. Wind shoots in the northern coastal area are up to 120 km per hour.

'We advise to find the way in the coastal provinces and Flevoland with empty trucks, trailers or caravans', Rijkswaterstaat warned. Only in the afternoon and evening the wind from the southwest turns out again.

The NS will leave fewer intercity on Wednesday on the route Den Helder- Zaandam due to the storm. On the route, two ride instead of four intercity's per hour. Thus, according to the NS, there is more room to solve any problems on the track. Sprinters drive according to the timetable.