Home / World / Kluivert has been voted the world's greatest talent 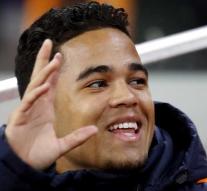 - Justin Kluivert (18) may call himself the greatest talent in the world. The Ajax striker received the NxGn award for best teen in the world (born on or after 1 January 1999) on Wednesday.

In the election of the international football website Goal, the fresh international was behind the winner of last year, AC Milan goalkeeper Gianluigi Donnarumma (19).

The third place was in the Vinicius Junior (17), which was recorded for 45 million euros last year by Real Madrid. Until the summer of 2019, however, the Brazilian striker will still play Flamengo football.