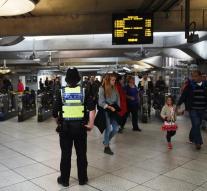 london - The British police are battling in Sunbury-on-Thames, southwest of London. According to the BBC, the police are searching for a house and evacuated residents of surrounding homes. The area has been closed down.

Saturday in Dover a suspicious 18-year-old man was arrested. The information he gave to the police led to the police action that is currently taking place. The action is related to the London Underground attack on Friday.

At the explosion in a subway station claimed by IS, twenty-nine people were injured on Friday. Witnesses saw a 'fireball'. 'I looked up and saw that flames filled the wagon and got my side,' describes a woman.

The explosive proved to be a homemade, improvised bomb, which has only gone halfway. The damage might have been much bigger. Injuries have in most cases burns.

According to the BBC, the bomb would have been of the same construction as that at the attack in Manchester. By that assessment in May, 22 people were killed.