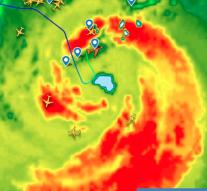 hong kong - Flight pilots KL887 from Schiphol to Hong Kong can not catch one hole. During the tropical storm Hato, they were the only ones who pushed their plane (Boeing 747-400) this morning.

It was not just a storm: according to the South China Morning Post, it was the heaviest storm for the airport since its opening 20 years ago. But for KLM pilots there are other standards. Because of the Dutch southwest winds, they have used windshields of 100 kilometers per hour, so the pilots decided not to deviate from another airport.

'For KLM, safety is a priority. The KL887 has arrived in Hong Kong without any problems. An estimate was made in advance whether Hong Kong's landing would be possible and additional fuel would have been included for one and a half hours if the device had to divert. But that did not appear to be necessary because the tropical storm had not yet reached the airport, 'said a KLM spokesman for NH News.

The storm has now increased, so that many of the flights to and from Hong Kong have been canceled.