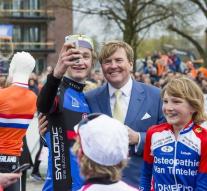 amsterdam - King's was especially vexed in Zwolle and Amsterdam on social media. According to research from agency OBI4wan.

According to the survey were more than 130 thousand times talked about King's. The hash tags that while most used were #koningsdag and #kingsday. Nearly 40 percent of the messages that were placed was a picture. Not only from Zwolle, where the royal family made its appearance, sent many tweets. Amsterdam led the rankings with online messages. The third place was taken by Rotterdam.

King Willem-Alexander was the most mentioned in tweets. Almost twice as often as his wife, Queen Maxima. There was great attention to Princess Amalia.