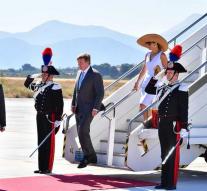 palermo - King Willem-Alexander and Queen Máxima go on the second day of their state visit to Italy to the capital of Sicily, Palermo. The island of Sicily, once part of a kingdom with Naples, rarely sees government guests coming to visit. The royal stay lasts only 5.5 hours, including the Sicilian concepts, very hard time for lunch at Mayor Leoluca Orlando.

In Palermo, the royal couple, accompanied by Minister Bert Koenders of Foreign Affairs, is paying attention to the migration problem facing Sicily as the Italian forerunner in the Mediterranean. Thousands of Africa and Middle East migrants try to reach Europe with mostly old boats and usually arrive in Sicily.

The king is praised by Italian journalists for all the courage of the island when capturing migrants. At the state banket he returned on Tuesday. 'Italy deserves our respect, yes, our admiration for his reaction to the tragedy that has taken place on its coasts and is still taking place. Thanks to the efforts of Italian men and women, many people have been saved, 'said Willem-Alexander. He wants to personally transfer that valuation to Sicily on Wednesday.