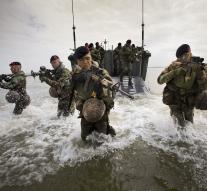 rotterdam - King Willem- Alexander is Saturday to Rotterdam to take out a march-past of the Marine Corps, composed 350 years. Along the City Hall on the Coolsingel walk with its 2000 Marines and veterans.

Also fleet personnel and a unit of the British Royal Marines taking part in the parade. The different uniforms refer to the areas of the world where they occur. Further driving historical and contemporary vehicles, and walking there are horses in the parade.

The grand parade ends with a luchtdefilé which fly a Hercules transport aircraft and helicopters over Rotterdam. The anniversary begins with a brief ceremony at the Rotterdam City Hall, where Mayor Ahmed Aboutaleb and Defence Minister Jeanine Hennis-Plasschaert a speech.

The Marine Corps was founded on December 10, 1665 by pensionary Johan de Witt and Admiral Michiel de Ruyter. They considered a " Regiment of Marines ' indispensable to the emergence of the Netherlands as a major trading nation in the Golden Age.