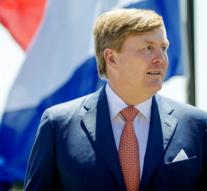 - Queen Willem-Alexander is next month present during the national Naturalisation. At the ceremony in The Hague mayor Jozias van Aartsen and keep alderman Rabin Baldewsingh (Integration) a speech.

Immigrants who have completed the integration course successfully, lay on that day a so-called Declaration of Solidarity. It looks at the rights and obligations associated with the Dutch nationality. Attendees also sing the first and sixth verse of the national anthem. Whether the King gets a special role in the ceremony and what that role will be, the Government Information Service (RVD) has not been disclosed.

The rural Naturalisation, which takes place for the tenth time, on 15 December in the Nieuwe Kerk in The Hague. Municipalities are required since 2006 to organize the Naturalisation. They are typically celebrations with a snack and a drink, to welcome the new citizens.