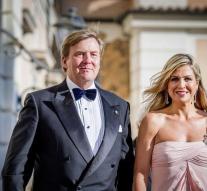 rome - King Willem-Alexander and Queen Máxima resigned from the Italian President Sergio Mattarella on Wednesday evening at Palazzo Colonna in Rome. That happened after a concert and reception that the royal couple offered their Italian host as a gratitude for hospitality during the state visit started on Tuesday. With the farewell, this visit is formally completed, even though there is another follow-up in Milan on Thursday and Friday.

The formal closure, however, makes it possible to start a new state visit to the Holy See in Vatican City on Thursday. The church state attaches to the protocol and formal separation in diplomatic relations with countries. For example, an ambassador who is accredited in Italy can not at the same time be a representative of the Holy See. The Netherlands therefore has two ambassadors in Rome. These days, although with the consent of the Vatican, they are housed under one roof, yet each has its own address and entrance.

King and Queen spent most of the day in Palermo, Sicily on Wednesday. After the state visit to the pope, there is a reception for the Dutch community in Rome, and travels the royal couple to Milan. There is also a big trade delegation that hopes to do business with the Italians in the wake of the royal visit.