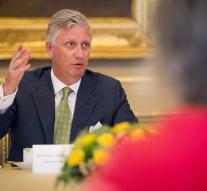 brussels - The Belgian king Philippe warned Wednesday in his traditional TV speech before the national holiday of Thursday,, false prophets, which invariably respond to emotions, cashing in on these faults and vulnerabilities.

They point easy scapegoats and make it as the gap between religions, peoples and eventually between all of us, only deeper. '

King Philip praised the courage of the victims and survivors of the attacks on March 22 in Brussels. In addition, 35 people were killed, including three terrorists.,, You have the ordeal endured with infinite dignity. 'The security forces have,, demonstrated an extraordinary commitment'.


,, We have endured severe trials together, 'says Phil.,, On the attacks which have hit us so hard, we keep a sense of insecurity about. The crises at the borders of Europe and its impact on our countries, create a climate of instability and uncertainty. in addition, the turmoil comes within the European Union, due to the British referendum. '