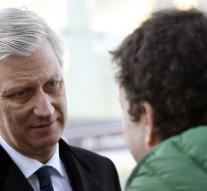 brussels - 'You have responded with dignity and magnificent resilience on terror. Nobody can understand what you went through. You are an example to us all. '

That said King Philip Wednesday in Brussels to survivors and relatives of the attacks in Brussels exactly a year ago. It is exceptionally speaking Belgian monarch live.

He did that at the unveiling of a monument to the victims, right in the neighborhood where the EU headquarters are right next to Maelbeek Metro Station. This was followed by a minute of silence and the European anthem was played, the portion from the Ninth Symphony of Beethoven in which the wish that all men are brothers is performed.

It was, after ceremonies at Zaventem Airport and Maelbeek Metro Station, the third official memorial of the attacks of March 22, 2016.