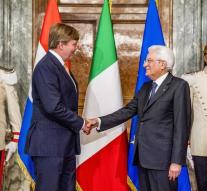 rome - Italy is indispensable for 'stability, strength and resilience of Europe.' That was what King Willem-Alexander said on Tuesday during his first day his state visit to Italy.

The Netherlands realizes that much of Italy is being asked in these times, the king said. 'The seriousness of the migration issue is an example of this.' On Wednesday, the royal couple looks at the migration crisis's follow-up in Sicily.

The pair was received by President Matarella, himself a Sicilian. He thanked the Netherlands for the commitment and cooperation in the European Union, NATO and the UN, where our country with Italy has a seat in the Security Council.