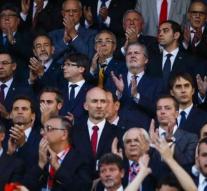 - The Spanish king Felipe is present at the opening of the new stadium of Atlético Madrid. The ten-time national champion takes on the brand new Wanda Metropolitano on Saturday night against FC Málaga, which seats around 68,000 spectators.

The 49-year-old Felipe has often shown Atlético's fan, unlike most royal family members, who support the 'real Madrid Real Madrid'.

Atlético has set aside this year from the legendary Vicente Calderón, where, besides the World Cup matches of 1982, there were also performances of the Rolling Stones, Madonna and U2.