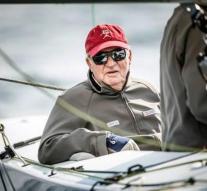 vancouver - Spanish king-emeritus Juan Carlos has become his 79th world champion. He was sailing in Vancouver the world champion on Thursday in the classic 6M class.

The team of the Nuevo Bribón won the World Championships since Monday after eight races on the Pacific Ocean. Juan Carlos and his team won only one race, according to Belga, but sailed most steadily.