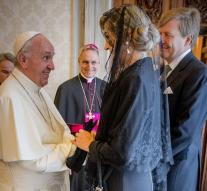 rome - King Willem-Alexander and Queen Máxima met during the state visit to the Vatican Pope Franciscus and spoke to him longer than planned. The royal couple even got more time than US President Donald Trump.

The royal couple had a tight schedule during the state visit, but Pope Franciscus could also do some of that. Just a minute before ten, the greeting of Willem-Alexander and Queen Máxima was on the agenda. Audience lasted longer than planned. His holiness took the time for the Dutch royal couple: no less than 35 minutes.

READ ALONG: King William Alexander: Italians are our brothers

US President Donald Trump met Pope Franciscus a month ago, along with his wife Melania, his daughter Ivanka and son-in-law Jared Kushner. Trump spoke to the pope for about 16 minutes. The complete visit lasted a total of almost three-quarters.