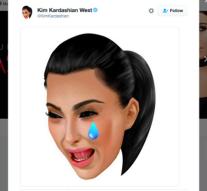 - BlackBerry does not have a lot of fans, but among them is called a very popular celebrity Kim Kardashian. Her BlackBerry Bold has gone and she could not hold dry.

Twitter let Kim know her Bold, a phone that several years is no longer manufactured, no longer works and they also can not find a new more on auction site eBay. 'I knew this day would come,' she sighs.

Now her favorite phone so finally defunct, she asked her followers that she had to take. A new BlackBerry, or maybe a Samsung? Or maybe even a second iPhone, to keep its current iPhone companion? 'I like to have two phones, you are always accessible,' she tweeted.


'Ideally, I would actually just another Bold,' she asked finally. 'The reality is starting to sink in and it makes me sad. '