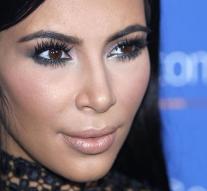 paris - Kim Kardashian, who was in Paris for the Paris Fashion Week is Sunday night in her hotel room and robbed by two armed masked men dressed as police officers.

The reality star was shocked but physically unharmed. The motive of the men who entered her room is not known, it is still unclear whether she has been robbed.