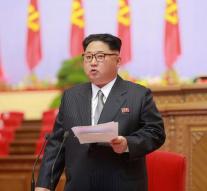 seoul - Kim Jong-un, the leader of North Korea, commissioned the factories to build better rocket heads and engines. That has revealed the North Korean state media.

The news comes shortly after the US Secretary of State Rex Tillerson praised North Korea because it did not make any further provocations.

During his visit to a North Korea Defense Development Facility, Kim Jong-un has informed about the production of rocket heads and rocket engines.

According to the KCNA State Press Office, Kim Jong-un has ordered the production of rocket heads and motors with carbon or carbon composite.

Kim Jong-un relied on provocative statements. President Trump spoke positive about North Korea during his speech in Phoenix. 'I respect the fact that he started to respect us. Perhaps there is something positive about that. '