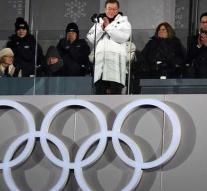 Kim Yo-jong is the first member of the North Korean ruling dynasty to visit the southern neighbor. The president of South Korea had invited the influential sister of Kim Jong-un and the president Kim Yong-nam to a conversation at lunch on Saturday. In that conversation Kim Yo-jong made her invitation.