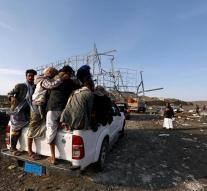 dubai - By an air strike at a checkpoint at the Yemeni capital Sanaa, seven people were killed on Wednesday. Five citizens in a taxi arrived and two armed men from the checkpoint, so witnessed.

The bombing in the Masajed district about 10 kilometers west of Sanaa also caused an explosion of a nearby gas station, which made the rescue operation difficult.

An international coalition led by Saudi Arabia has already carried out thousands of air attacks against the armed Houthi rebels who control the capital of Yemen and part of the north of the country.

The coalition has been trying to restore the power of the internationally recognized government since March 2015. In the land torn by civil war, 10,000 people have already been killed.