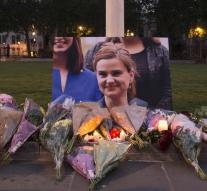 london - The 53-year-old man suspected of murdering British MEP Jo Cox harbored Nazi sympathies. The police found in his house include the image of an eagle with swastika and dozens of books glorifying Hitler and the Third Reich. This was announced by the prosecutor Monday during the trial.

The alleged offender collected except right extremist material also newspaper clippings about Cox, including a printed article that she wrote for a local newspaper. She put them why they thought that Britain should remain in the EU. Cox (41) was shot dead on the street in the northern English city of Birstall and also stabbed several times. That happened a week before the referendum on brexit.