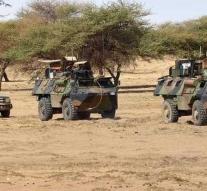 bamako - The four UN soldiers who were killed by an explosion in Mali on Wednesday are from Bangladesh. Their four seriously injured colleagues also come from that Asian country, the United Nations said.

The soldiers lost their lives when the explosive exploded near their vehicle. A day earlier, six Malian soldiers had also died in the area when their vehicle was driving on a land mine. Dutch soldiers are also active in Mali, but according to the Ministry of Defense they were not involved in the Wednesday incident.