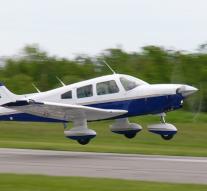 - "Three persons were on Sunday killed in a plane crash at the Reno-Tahoe International Airport in the United States."

"That reports CNN. The plane, a Piper Cherokee, arrived quickly after takeoff in trouble and crashed in the parking lot of the airport in the state of Nevada. The three occupants were killed, more nobody was hurt. Or damaged fifteen vehicles. The traffic was not interrupted."