Home / World / Killed in shooting in US abortion clinic 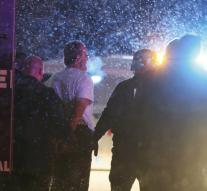 - In a shooting at an abortion clinic in Colorado Springs Friday three people were killed and nine people injured. According to police, the dead, two civilians and a policeman. The shooter was hours in the clinic. He surrendered after a shootout with the police eventually.

The gunman, a white man with a beard and long coat, entered a clinic of the American organization Planned Parenthood Federation of America (PPFA) inside. He also had various stuff with them, such as bags.

There has long been uncertainty about the shooting. US media reported fairly quickly that the police had reported that shooter was driven into a corner and almost overpowered. Moments later told police spokespeople have " the situation was not stable " and that the perpetrator was no longer in the picture. Shortly afterwards there was again shot.

The PPFA has been pressing for nearly 100 years for voluntary and " planned parenthood " and therefore aims at preventing unwanted pregnancies, including by means of abortion. Because the latter is the major organization rejected by conservative and radical right movements.

The clinic is in the northwest of Colorado Springs, a town of nearly 450 000 inhabitants, 90 kilometers south of the capital of the state of Colorado, Denver.