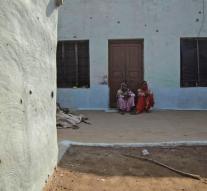 - Shelling in the border area between India and Pakistan have four people were killed, including a child. The other two victims were Pakistani citizens and one Indian soldier. This was announced by the armies of both countries.

Tensions between the two nuclear powers have in recent months suffered again. One of the main bones of contention is the Kashmir region, which claim both countries. In July, a young warrior from Kashmir was slain by the Indian army. Result were massive protests in the Indian part of Kashmir, which certainly eighty people died.

Relations between Pakistan and India received a blow in September when armed men stormed an Indian army base in Kashmir and killed eighteen soldiers. India, Pakistan blamed the attack and alleged reprisal attacks on targets in the Pakistani part of Kashmir.