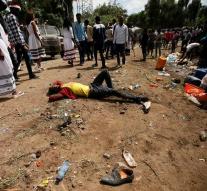 - During a festival in the Ethiopian Bishoftu according to opposition groups Sunday many dead and wounded when shots were fired and there was a huge throng among protesters. The government has acknowledged that people have died, the opposition speaks about fifty killed demonstrators.

The riot began during a religious festival, where the dislike of the regime was expressed. ' We want freedom, we want justice '' protesters shouted, according to the BBC.

Bishoftu is also known by the older name Laga Arba located in the Oromia region. It has long troubled the region. The residents, the Oromos, are disadvantaged in their own words in Ethiopia and excluded from influential positions. Which are nearly a quarter century mostly filled by members of the minority from the northern Tigray.

The Tigray People's Liberation Front (TPLF) dominated the fight against dictator Mengistu Haile Mariam. After the fall of the dictator Ethiopia received in 1991 an authoritarian government that was dominated by the Tigrayers. They have divided the country into ethnic regions. The largest ethnic states is growing protests against the regime in Addis Ababa.

The Oromo are the largest ethnic group in the country of nearly 87 million inhabitants. They constitute some 30 million people more than a third of the Ethiopians. The Amharas, who dominated the country before, the second group of approximately 24 million people. The Tigrayers are a minority of about 5.3 million people.

Last month among others Dutch flower and plant growers fallen victim to outbreaks of ethnic unrest.