Home / World / Killed in protest against peacekeepers in CAR 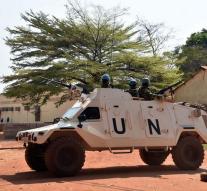 - A demonstration in the Central African Republic has turned violent on Monday, with three deaths. Blue Helmets in the capital Bangui and unknown armed men fired at each other, said the local Red Cross. All three of the dead were protesters.

Hundreds of people were on the street went to the departure of the UN peacekeeping force to demand from the country. According to an eyewitness, the demonstrators had anti-UN posters at them and pelted them with stones peacekeepers.

The UN soldiers overcame initial warning shots. Then came a firefight between the peacekeepers and armed men near the demonstrators.