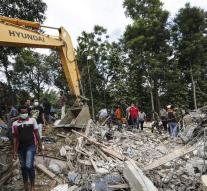 jakarta - When an earthquake in the Indonesian province of Aceh are at least 25 people lost their lives and dozens wounded arrived. The quake with a magnitude of 6.4 caused the collapse of many houses. According to the national seismological center was the epicenter of the quake 18 kilometers northeast of Pidie Jaya. No tsunami warning was issued.

Rescuers have found 26 severely injured under the rubble.

People ran in panic after the earthquake the streets and houses have collapsed. According to the civil defense in the area on the island of Sumatra have collapsed many houses and provide physicians street first aid to the wounded. Fearing aftershocks, people dare not return to their homes.

Indonesia is frequently rocked by earthquakes because it lies in a seismic active zone. On Boxing Day 2004 came to a tsunami after an earthquake with a magnitude of 9.1 more than 200 000 people dead.