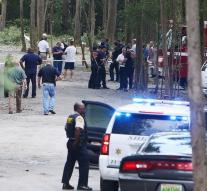 tuscaloosa - In a plane crash near Tuscaloosa in the US state of Alabama on Sunday all six occupants died. That confirmed the authorities across US media.

The plane suffered engine trouble and the pilot wanted to make an emergency landing at the airport in Tuscaloosa. The runway was not achieved and instead the plane crashed in a forest not far from. The victims were three married couples, three men and three women.