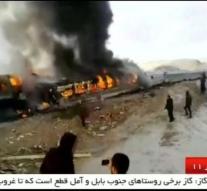 tehran - A train accident, according to state media certainly claimed five lives in the north of Iran. Another twenty people were injured.

A passenger train collided with a stationary train about 300 kilometers east of Tehran, at a train station. It is feared that the death toll will rise further.

According to the state passenger train derailed in part by the blow and flew the wagons on fire.