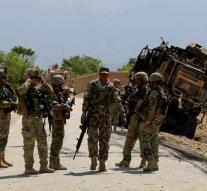 kabul - In an explosion at the NATO airbase in Bagram, Afghanistan, Saturday morning at least three deaths. Thirteen people were injured. Reported that the local authorities to CNN.

According to the NATO mission found the explosion just after half past five in the morning instead. The identity of the victims is still unknown. Nor is it clear whether it is an attack or accident.

The airport is the largest military base in Afghanistan and is located near the historic town of Bagram in Parwan province. Thirty kilometers south is the capital, Kabul.

The news follows a series of recent attacks in the violence-ravaged country. Thursday, a suicide bomber blew Taliban on a car for the German consulate in the northern Afghan city of Mazar-i-Sharif., Killing six people were killed and over 120 injured.

A week earlier came in fighting between US and Afghan forces and Taliban fighters thirty civilians were killed, as well as two US soldiers and 26 militants. On the same day mortars Taliban changed a wedding in the northern province of Faryab in a bloodbath. Seven wedding guests were taking slain.