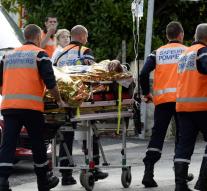 puisseguin - In a frontal crash between a bus and a truck with the elderly near Bordeaux this morning 42 people died, including the truck driver.

The blow was so hard that the two vehicles ended up in a sort of embrace. The victims are the elderly and the French were members of a senior citizens' association. All were from the region where the accident occurred. The elders had just begun a day trip when the accident took place around seven-thirty. It has notified the Ministry of the Interior in Paris Friday.

The accident took place at half past eight on the D123, near the town of Puisseguin, northeast of Bordeaux. The bus carrying elderly had left Petit- Palais, and on the way to the Béarn at the foot of the Pyrenees for a holiday.

The vehicles follow after the collision on fire. The elderly were like rats in a trap and could not move. Only eight passengers managed to escape from the burning bus. Five of them are slightly injured, three are unharmed. It is the most serious road accident in France since 33 years: in July 1982, 53 people were killed in a bus accident at Beaune. The emergency services are massively present.