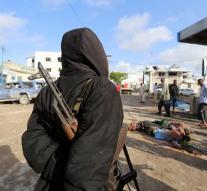 - An explosion of a roadside bomb in the city Lafole southwest of the Somali capital Mogadishu on Thursday at least eighteen civilians killed. The bomb was placed in a remote detonated when a packed minibus drove past, the police said.

The attack appears to be the work of Islamist terror organization al-Shabaab. The group is driven by military support of the African Union from Mogadishu but continue to carry out terrorist attacks.

An eyewitness driving on the same road and said the minibus was driving behind a military vehicle with soldiers. He was overtaken by both vehicles and heard the explosion. The army vehicle, which presumably was the target of the attack, remained unharmed, he said.