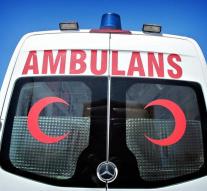 Five other soldiers and two village guards were injured. They rode with an army vehicle on a landmine which was laid by fighters of the banned Kurdish Workers Party PKK, said the news agency DHA.

Anadolu reported further, that the army carried out an unmanned aircraft of its own Turkish-made air strikes on PKK positions in the Hakkari province. Three PKK fighters were thereby 'neutralized'. This usually means 'slain', but it can also mean that they are wounded or captured.