Home / World / Killed in attack on army in Turkey 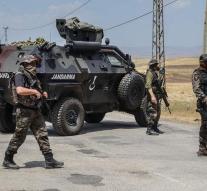 diyarbakir - A car bomb attack on the Turkish army on Saturday killed two people, including a soldier. Seven soldiers were injured, said sources in the security services.

The attack took place in the troubled southeastern Turkey, where the military almost daily battle since July last year, supplies with Kurdish militants. The militants spent Saturday first car bomb exploded at an army post and then opened fire.

Friday it even came to fighting between the army and Kurdish fighters. The army did hit militants preparing for an attack in the province of Hakkari and intervened. Seventeen fighters of the Kurdish separatist PKK were slain. In addition, the military firearms, ammunition and hand grenades in Rose.