Home / World / 'Kill more by code for rescuers at sea' 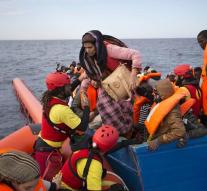 brussels - Tighter rules for organizations that save boat migrants in the Mediterranean can increase the number of drowning deaths by thousands. For this reason, Amnesty International and Human Rights Watch (HRW) warn.

Italy is working with the European Commission to draw up a code of conduct for aid organizations (NGOs). They should not be able to pick up drenches in Libyan waters, disable their transponders and no longer be able to telephone with people on smuggling boats or use light signals, as evidenced by a leaked version of the code.

'Given the scale of tragedies at sea and the terrible abuse of migrants and asylum seekers in Libya, the EU should work with Italy to improve search and rescue operations in Libya waters and not to limit it,' said Amnesty and HRW.

The EU countries want the code of conduct to come soon.