Home / World / Kill in uprising in prison for terrorists 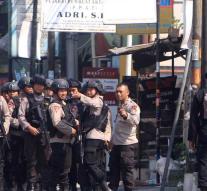 jakarta - At least six people were killed in fighting between the Indonesian police and Muslim militant prisoners in a prison in Depok on West Java. The police and the anti-terror unit report this. There are convicted terrorists and suspects of terrorism in the high-security prison.

The fighting broke out Tuesday between staff of the anti-terrorist unit Densus 88 and detainees after a dispute over food controls, reports The Jakarta Post. On social media you can see images of armed prisoners with a flag of Islamic State. They would also have hostages.