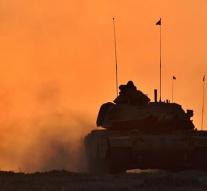 ankara - Turkey has killed eight people in northern Iraq. According to the Turkish army, it is the warriors of the Kurdish movement PKK.

The air attacks followed the death of two Turkish soldiers in northern Iraq. They came to life on Monday by a bomb bomb that would have placed the Kurdish militants. Two other soldiers were injured.

Turkey has been conducting air attacks on the PKK, which also has bases in northern Iraq for a long time.