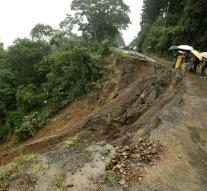 san jose - In Central America, 22 dead have already fallen due to the tropical storm called Nate, which draws across the region. Especially Costa Rica and Nicaragua are affected. The authorities fear more and more victims.

In Costa Rica there are certainly eight and in Nicaragua eleven deaths, mainly due to floods after severe precipitation. In addition, dozens of people are still missing. Costa Rican president Luis Guillermo Solis told local media that 'there will be many more victims. '

The storm draws north to the Yucatan region in Mexico and the south coast of the United States. Nate is expected to grow into a category 1 hurricane on Saturday above the Gulf of Mexico. It is predicted that the storm will reach the American South Coast on Sunday and will provide a 250-million-meter drop.

Residents of the US state of Texas have been notified by the authorities that they have to prepare for the storm.