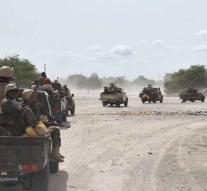 niamey - Armed men killed seven people in Niger in an attack on a water source from the French company Foraco. According to local sources, the jihadist terror group Boko Haram is behind the attack.

The company says that the victims are six employees of Foraco and one official. The latter was kidnapped by the terrorists and was later recovered with a severed throat.

Boko Haram is very active in the border area of ​​Niger and Nigeria where the water company is located. The jihadist group wants to establish an Islamic caliphate and has killed more than 30,000 people in the struggle since 2009.