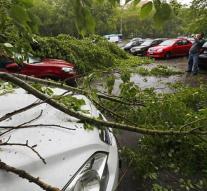 The meteorological service had warned for the emergency weather. However, it was a lot harder than expected. According to Interfax, around 7000 households were without electricity, and a police station was blown away.