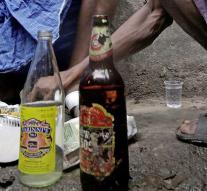 saharanpur - At least 28 people were killed in India by consuming illegally-fired drinks. The victims live in two neighboring districts in northern India and the police think that the...

An unknown number of people have been admitted to hospital in a serious condition.

Consuming illegally-fired spirits is widespread in India, mainly because it is much cheaper than imported drinks or Indian brands. But the makers of the illegal goods regularly use industrial alcohol or other substances that lead to serious poisonings. That costs about a thousand people every year.