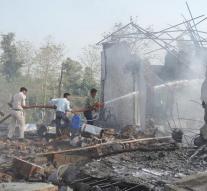 balaghat - An explosion in a fireworks factory in Kheri village in the Indian district of Balaghat has killed 23 people and killed seven people on Thursday. This is what the Indian press agency PTI reports

According to the local government in Madhya Pradesh, the cause of the explosion is not yet known. It is suspected that someone has thrown away a burning cigarette. The factory was outside the village.