Home / World / Kill by fires in Portugal and Spain 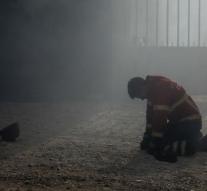 vigo - At large forest fires in Portugal and Spain, six people were killed on Sunday. Thousands of firemen are in rope. Due to drought, high temperatures and hard wind from the Atlantic Ocean, forest fires are difficult to fight.

Two victims in the Spanish province of Pontevedra resided in a van at the site of Nigrán, enclosed by the flames, reports the newspaper El Pais. The third victim is an elderly man who died when he tried to save his animals. The city of Vigo, the largest city of the autonomous region of Galicia, is surrounded by flames. Several schools remain closed because of the fire. The authorities suspect that the fires are lit.

In Portugal, three people got into the flame. Certainly 25 people were injured, mainly firemen. In June, heavy forest fires also had dozens of lives in Portugal.