Home / World / Kill by explosion on an oil tanker in Pakistan 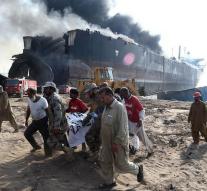 - By a massive explosion during demolition work on an oil tanker and fire subsequently broke out, at least ten Pakistani workers were killed Tuesday. There were more than fifty wounded. The accident happened at a construction site in Gaddani, 45 kilometers from the major port city of Karachi, where the ship was decommissioned.

A union leader said the death toll could rise because it is unclear whether there were people in the wreck. Firefighters were summoned from afar but could do nothing against the blaze. The cause is still unknown. Gaddani is notorious for its poor working conditions in the shipping industry. Dismantlers must often do without protective gear.