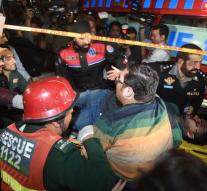 lahore - By a bomb attack in the Pakistani city of Lahore on Monday at least ten deaths. According to police, the explosion took place during a protest rally organized by Pakistani manufacturers of pharmaceuticals and drugstore.

The English-language newspaper Dawn reported that at least thirty people have been injured.