Home / World / Kill by explosion at busy hotel in Somalia 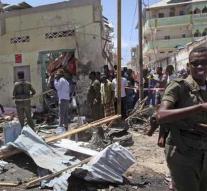 mogadishu - At least four people were killed by an explosion at a busy hotel in the capital of Somalia. The blast was followed by gunfire, police and emergency services said Thursday.

'Until now we have counted four deaths, and five others were injured in the explosion outside Hotel Wehliye. The death toll can still rise, 'said the head of the local ambulance service.

In capital Mogadishu, attacks have already been committed on hotels.