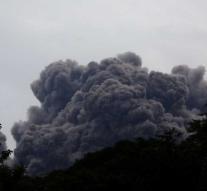 guatemala city - In Guatemala, at least twenty-five people have died or been killed by a volcanic eruption. Another hundred people were injured, the authorities report. It is the second time this year that the Volcán de Fuego erupted.

The volcano spewed a kilometer-high cloud of ashes and smelled out on Sunday. Lava also flowed down and threatened a village. More than three thousand people from the area have fled and the international airport of Guatemala was closed. In the nearby villages of San Pedro Yepocapa and Sangre de Cristo houses and cars were buried under the ashes.

According to the Ministry of Health, several people have been admitted to the hospital with burns. Children are also among the victims. President Jimmy Morales called on the residents to follow the safety instructions. He thanked neighboring Mexico for the offered help.

Volcan de Fuego, the Fire Volcano, which lies fifty kilometers southwest of the capital Guatemala City, is known as the most active on the American continent. Ax's also ended up in the capital. According to the emergency response service in the country, this is the most violent outbreak in the last four decades.