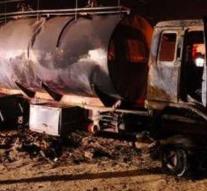 teheran - Due to a collision between a passenger bus and a tank truck in Iran, at least thirteen deaths occurred. The bus was rammed by an unknown cause just after departure at a stop by the tank truck in Sanandaj in the west of Iran.

The tanker was loaded with petrol. The vehicle caught fire after the crash. Some media speak of 27 deaths. Seven bus passengers were seriously injured.