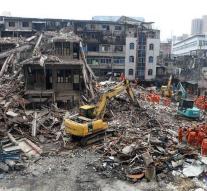 - By the collapse of several houses in eastern China at least 22 people died. Rescue workers knew six people alive under the rubble in the city of Wenzhou to pick from.

The cause of the collapse is not known. At least four buildings collapse. These were houses that were built by the residents themselves. China's move buildings regularly that are ignored when building safety.